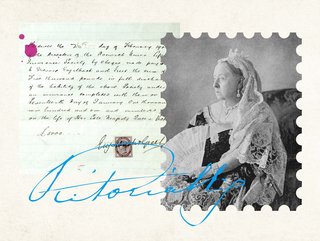 With the help of insurers Aviva and Zurich, we've delved into the archives to uncover the life insurance policies of some of history's most famous figures.

A lot has changed in the last 300 years – from modern medicine to modern music. Now new documents are casting light on the way life insurance has changed, too. With help from insurers including Aviva and Zurich, we've uncovered the life insurance policies of some of the most famous historic figures – from Charles Dickens to Queen Victoria. There’s even one policy dating back more than three centuries to 1715.

According to the Association of British Insurers (ABI), the average payout on term life insurance policies today is almost £80,000. But reports suggest that the rich and famous, like US tech billionaires, are insuring themselves for hundreds of millions. So how does that compare to celebrities of old? And who had the better cover – Dickens, or the queen who reigned for most of his adult life?

The answers are surprising and they shed a light on the evolution of life insurance over the ages.

The UK’s second longest-reigning monarch is one of British history’s most imposing figures. Records show that she had a £2,000 policy with Sun Life Assurance taken out in July 1851, about 14 years after she came to the throne. That sum would be worth £170,000 in today’s money. The policy could have been taken out by anyone with an insurable interest, but the presence of an entry in the medical officer’s book suggests that it was taken out either by Victoria or by someone very close to her. The listing for the policy gives her occupation quite fittingly as ‘Queen’; she is sandwiched in the archive books between a solicitor and a timber merchant.

Victoria wasn’t the only person protecting themselves against her death. In the years leading up to 1901, Victoria’s health had waned considerably and – at 81 years old – the public surely must have sensed the end of her reign approaching. Just five days before the queen died, theatre company Engelbach & Greet took out a policy to protect themselves against any adverse impact. It was for £5,000 of insurance for six months and the premium was £500.

“It was common for people with an insurable interest to cover themselves against potential loss,” Aviva Group Archivist Anna Stone tells us. “Engelbach & Greet had to pay for their theatres and artists so they needed to be sure they were not left out of pocket if the theatres were closed. According to the records, they had regularly insured Queen Victoria and other members of the royal family with other insurers before they took out this particular policy.”

It was a gamble that paid off – for the theatre company, not for the insurers. A receipt in Aviva’s archives shows that Engelbach & Greet received £5,000 from Norwich Union on 26th February 1901 – the equivalent of £430,000 today. In total, insurers are believed to have paid £250,000 (£21.5mn in today's money) to organisations insuring themselves against the queen’s death.

Agatha Christie, the bestselling author of detective novels, is so universally popular that her books are outsold only by the Bible and the works of Shakespeare (who, let’s face it, had a 300-year advantage). So when Christie died in 1976, it was headline news.

The Norwich Union archives show that, in 1959, Christie took out a life insurance policy under her married name Agatha Mallowen. It was quite late for Christie, who was approaching 70 and had already penned her most famous novels including Death on the Nile and Murder on the Orient Express. Records also show that, when Christie died in 1976, the policy paid out £29,970.05 (over £160,000 today when accounting for inflation). There is no record of who benefited from the payout – although it’s likely to be either her second husband Max, who lived until 1978, or daughter Rosalind. 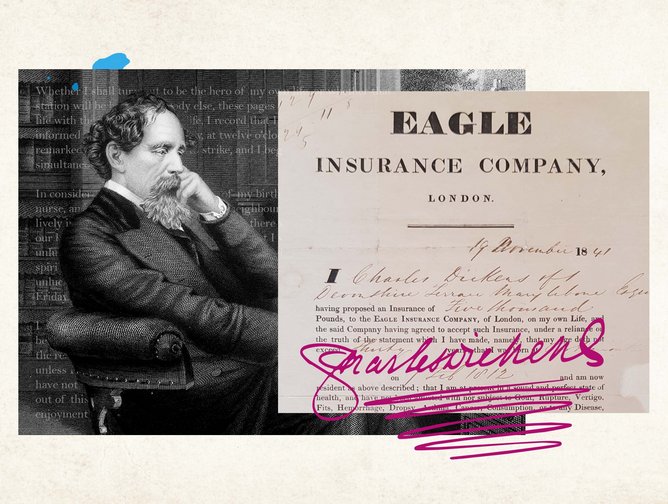 When Charles Dickens signed a life policy with Eagle Insurance on 19th November 1841, he had already published five novels including Nicholas Nickleby and Oliver Twist. He paid for cover worth £5,000 (£360,000 today) – perhaps reflecting his newfound fame and fortune. The policy was signed in the presence of Dickens’ father, John, and he was described as being in “very good general health” by his friend, the actor William Charles Macready.

The motivation for him getting life insurance so young may have been an impending voyage to America. Less than two months after signing the policy, Dickens set sail for the US where he would visit Boston, Washington DC, the prairies and the south. His inclination to get life insurance beforehand was almost vindicated – the passage across the Atlantic was rough and his cabin was so small that he likened it to a giraffe being forced into a flowerpot.

The insurance remained in force until Dickens’ death and in October 1870, Eagle Insurance paid £6,337 to the beneficiaries – more than £500,000 today when adjusted for inflation.

The 18th-century statesman Robert Walpole is often regarded as the UK’s first Prime Minister, although he wouldn’t have used the title himself. By 1715, six years before Walpole came to power, he was already an influential figure in the court of the newly crowned King George I. In the same year, he became a member of the Amicable Society – the earliest example of life insurance.

It was more like a lottery than life assurance as we would know it today. There would be a maximum of 2,000 members at any time and anyone could join as long as they appeared healthy and were aged between 12 and 45. As a government minister and MP, Walpole would be important enough to almost guarantee himself a place. Each member paid a set annual premium of £6 and 4 shillings (about a third of the annual salary for a general labourer). In return they would receive a number, which represented their share of the scheme. Members could pay for as many numbers as they liked.

At the end of each year, the contributions – minus the running costs – were divided among the family of members who had died that year. The amount you received depended on how many numbers you owned, but also how many other members had died. If you were the only member to die in a particular year, your family would benefit from the entire pot. It was a forerunner of life insurance that shows just how much the industry has changed in the course of 300 years.

The policy in Walpole’s name was before the 1774 Life Assurance Act so the archives show very little, including even if the policy was taken out by Walpole himself. But assuming the premiums were kept up to date, the policy would have paid out to the beneficiary in 1745, the year of Walpole’s death. 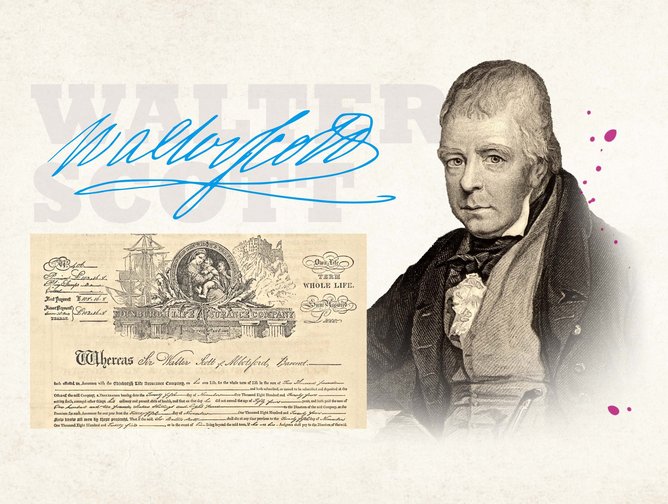 As well as a pioneer of historical fiction, it’s fair to say that Sir Walter Scott was a bit of an aficionado for insurance. The author of Ivanhoe and Rob Roy was a director of an insurance company in Scotland and during his lifetime took out three life insurance policies that we know about today.

The first two were both taken out in 1824, when the author was in his 50s. One, held with the Edinburgh Life Assurance Company, was worth £2,000 with a bonus of £78 and 18 shillings. Scott paid over £102 a year as a premium. The other policy taken out in 1824 was held with Scottish Widows to the value of £3,000 with a bonus of £360. We don’t know how much he paid in premiums for that particular policy, although given the average life expectancy in the mid-1820s was only 40, it’s likely to have been similarly high.

Two years later, Scott took out another life insurance policy with Norwich Union worth £1,000 with a bonus of £27 and 7 shillings. We don’t know the exact date but it’s possible that Scott felt he needed more insurance cover after his wife Charlotte died in May. Scott had four children, all of whom were in early adulthood at the time of his wife’s death.

That meant, when Scott died in 1832, the writer would have been covered to the value of more than £6,400 (around £500,000 in today’s money). It’s one of the highest payouts on this list, similar to Dickens, but it still pales in comparison to modern-day figures. Celebrities routinely take out life insurance to the value of tens of millions, while performers and sports stars are able to protect their most famous features.

Even though the numbers might be dwarfed by modern-day payouts, the archive records still provide a fascinating glimpse into the history of life insurance. They show us where the industry has come from – as far back as its inception in the early-1700s through to its burgeoning popularity in the Victorian era. And they cast new light on the life insurance policies of some of British history’s most famous figures.