McKinsey finds UK SMEs will look to cut out brokers and adopt a digital-first approach to insurance once the pandemic subsides...

Digital interactions between SMEs and their insurers in teh UK have taken on greater importance during the COVID-19 pandemic and look set to dramatically increase once things return to ‘normal’.

Research from McKinsey identified a growing need for insurance firms to offer micro, small and medium-sized enterprises digital channels to access their services.

Convenience and efficiency are the primary reasons SMEs say they preferred digital to human interaction, and they are likely to rely on technology more once the crisis subsides.

More than a fifth of SMEs questioned said they expect to use digital channels more in the future, even as human interaction increased due to the complicated nature of coverage during the pandemic.

McKinsey found a greater number of businesses will also look to cut brokers out of the equation entirely once the pandemic has died down: “The number of SMEs that believe they will use brokers less or not at all post-COVID-19 has risen 10 percentage points since May, and 17 percent of all SMEs indicated they would stop using in-person communication with their insurer once the pandemic is over.” 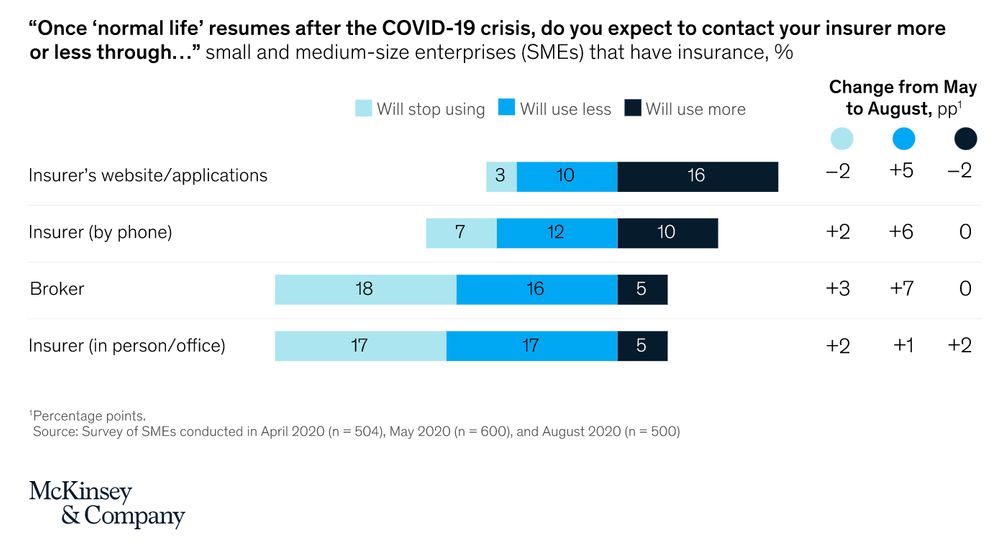 Smaller enterprises - 30% of which find the new-product journey “extremely challenging” - are seeking a transparent “retail-like experience, with simple, intuitive interfaces, journeys, and language”.

The findings align with polls in the US, which found adoption of digital channels in the P&C claims process is up 18% in the past three years. Customer satisfaction was also higher in those who used websites and mobile apps.

Global investment in the InsurTech sector reached a new record during this year’s second quarter, according to the broker Willis Towers Watson

Global investment in the InsurTech sector reached an emphatic record during H1, 2021, as half-year funding of US$7.4 billion exceeded full-year investment in 2020, and in every other year, according to the new Quarterly InsurTech Briefing from Willis Towers Watson.

It was found that the latest quarter saw 162 deals yield more than $4,824 million in investment, a 210% increase over Q2, 2020. The enormous quarterly total, itself more than any annual total before 2019, was driven largely by 15 mega-rounds of $100 million or more. Collectively, these deals reached $3.3 billion, or two-thirds of total funding during the quarter. The money was raised predominantly by later-stage players seeking expansion.

A need for the insurance community to reflect digital changes

Series B and C fundraisings drove a large number of deals in the second quarter, but the number of early-stage deals also increased. They were up by more than 9% from the previous quarter, and 200% from pandemic-stricken Q2, 2020. As a percentage of overall deals, early-stage activity held roughly steady, at 57%.

InsurTechs focused on distribution accounted for 55% of start-up deals, and for 10 of the 15 mega-rounds. Most of the distribution InsurTechs target reduced dependence on agent channels. Of all Q2 deals, 73% were for P&C-related InsurTechs, while 43 companies raised funds for L&H technology. Funds were raised by companies from 35 countries, including new entrants Botswana, Mali, Romania, Saudi Arabia, and Turkey.

Dr. Andrew Johnston, global head of InsurTech at Willis Re, said: “As technology changes our lives, society will demand an insurance community that reflects and supports our changing, digitally empowered behaviours. Consumers and businesses increasingly expect insurance to be delivered when and how they want it, and risk carriers that fail to respond will fall away over time. To embrace technology is a minimum survival condition. Those that use it to redefine service in the insurance world will thrive. That means a positive future for InsurTechs that bring a truly differentiated business approach to our industry. Some of them will create untold long-term opportunities for themselves and the insurance sector.”